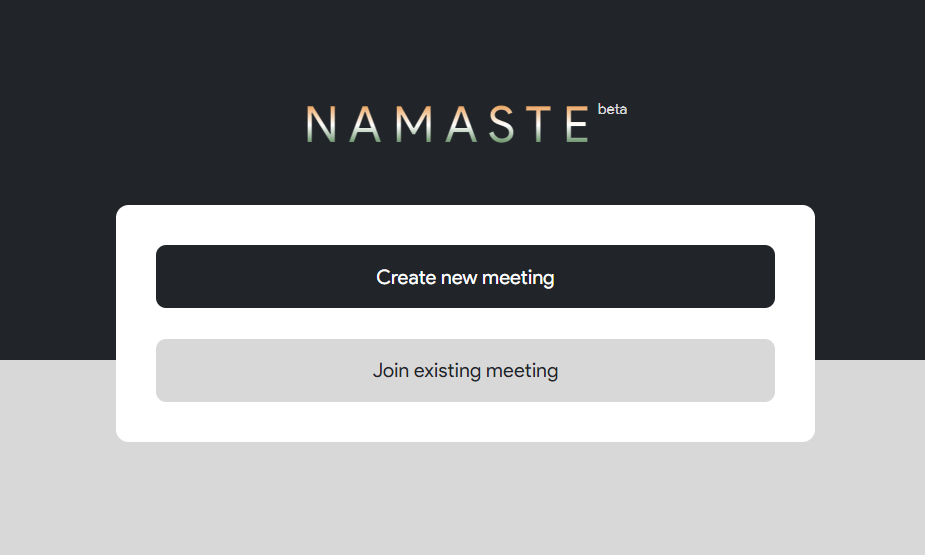 What Is Say Namaste Meeting App And How To Use It?: A new video conferencing tool has been launched for Indian users. In this article you will know what is the Say Namaste meeting app and how it can be used on a web browser?

Say Namaste Video Confrencing App is Introduced as an alternative of popular video confrencing software like Zoom, Google Hangouts, Skype, CISCO Webex Meetings and so on. The widespread scrutiny forced many users to look for Zoom-alternatives. It’s probably for this reason that the Indian Developer has launched its own alternative to the video calling app – Namaste.

What is Say Namaste Meeting App?

Say Namaste is currently available in beta mode. It is an online tool which can be accessed through a web browser.

The platform allows you to place a video conference call by creating a meeting link and sharing it with the participants, just like Zoom.

It will allow group video calls with multiple people simultaneously, however, the number of maximum participants has not been revealed yet.

Namaste’s mobile app will reportedly let you switch to the rear camera by tapping on the “toggle” option while you are on call.

It will also give the option to not use the camera for calls at all and only do an audio call. Most videos calling apps offer that feature.

As per a report by Republic World, this platform is the brainchild of a Mumbai-based web application and software development company called Inscripts.

It has been experiencing a high demand since coming out, which even caused the site to be down.

The website currently has a note saying that “users may face some temporary connectivity issues with the site as they have been facing tremendous demand, thereby requesting users to check back after some time.“

Just like other popular video-conferencing platforms, Say Namaste offers users with live calling and chat options. It allows you to invite other users to a conference call using a meeting link and a code.

To begin a new call, Say Namaste will request for your camera and microphone access on the device, however, you can choose to turn off the camera and mute the audio once you’re on a call.

It also lets you toggle between the screens and check out other meeting participants similar to Zoom.

The website also provides a feedback form to users at the bottom of the page so people can submit their queries or suggestions on the new tool.

How To Use Say Namaste App & Platform?

In just three simple steps you can host a meeting on Say Namaste App & Platform. The steps are as following:

Step 1: Currently, you can use it by visiting the link here and tap on “Create new meeting” or “Join Existing Meeting“

Step 2: Add your name and you will get Meeting URL, Meeting ID and Meeting code.

Step 3: Share the Meeting ID, code and URL by simple copy-pasting with other participants so that they can join.

Step 4: Ask other users & clients to join the meeting on Say Namaste meeting platform by entering the meeting id & code.

In Namaste, it is not necessary that only the host can invite people to join the meeting, infact, whoever has the meeting details can join it.

Do note, the platform is currently in beta and is prone to various security issues. We would recommend you sign up only once the stable version is rolled out.

Users can access the tool on their laptops or desktop computers without having to download or install any installation. Users can create or join a meeting by visiting their website at this link on a browser.

It is expected that Say Namste app version will be launched on Android and iOS platforms next week. Once it’s out, it should be available on Google Play and the App Store for download.

What is Say Namaste App?
Ans. – Saynamaste App is a meeting & Video Conferencing Software Application made by India.

Say Namaste Application is Free or Paid ?
Ans. – It is totally available for free.

Conclusion: Just because the Say Namaste app is endorsed by the Inscripts, it isn’t necessarily more secure than Zoom. The app is still in beta mode, which means that there are still unpatched and undiscovered bugs that are being worked on.

The app’s security features have also not been tested in the wild yet, and it’s only after its safety and privacy features are examined by third-party security experts that the app can be deemed secure enough for most use-cases.

1 thought on “What Is Say Namaste Meeting App And How To Use It?”